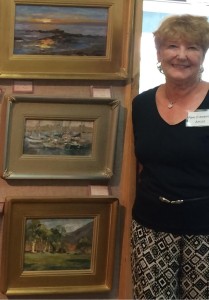 Originally from England, Pam majored in art at Lincoln College earning an award of distinction for her work. After graduating, she taught elementary school before immigrating to the United States.

After traveling extensively throughout Europe and the Middle East. Pam settled in California where she pursued her interest in art, studying with a Russian impressionist who greatly influenced her style of painting. She continued to study at the California Art Institute and has taken workshops with such renowned artists as Karl Dempwolf, Ray Roberts, David Gallup and Matt Smith.

She continues to study with Karl Dempwolf whenever possible and his incredible enthusiasm for painting has inspired and motivated her in her pursuit of “Plein Air” painting. Whether it’s the mountains, parks or the California seashore, Pam finds painting outdoors a Challenge since the light and weather conditions are constantly changing. Her goal is to capture the mood and atmosphere of the scene with her use of color and impressionistic style.

An avid collector of art books, she is an admirer of such great artists as Edgar Payne, Nicolai Fechin and Franz Bischoff.

Pam is a member of the California Art Club, the Westlake Village Art Guild and the Allied Artists of the Santa Monica Mountains and Seashore. She exhibits in local art events and has won numerous awards for her work.

Pam D’Ambrosio can be contacted via email at pdambrosio@earthlink.net
↑